The New Bishop of the New Anglican Diocese of Lalaland 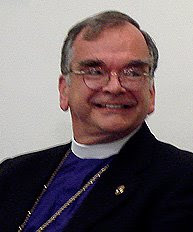 Former Pittsburgh Bishop Robert Duncan, who was deposed from the episcopate last month, has warned traditionalists in the Church of England that, in his view, what happened to him could happen to them.

Duncan spoke to journalists at a press conference on October 17 at All Souls Church, Langham Place, London, chaired by Canon Chris Sugden of Anglican Mainstream. Duncan was deposed on September 19 by Presiding Bishop Katharine Jefferts Schori with the consent of the House of Bishops of the Episcopal Church. Duncan was charged with "abandonment of communion" for his actions in openly planning to remove his diocese from the Episcopal Church to align with the South America-based Province of the Southern Cone.

Duncan told traditionalists in the Church of England that they should not be complacent. Noting that "what begins as a liberal initiative quickly becomes illiberal", he cited the July General Synod's debate on legislation for women bishops as an example of how what had happened to him could also happen in England.

"Don't assume the progressive party will behave any differently over here" he said.

He cited as further examples of "illiberalism" the way Lambeth Conference 2008 organizers had sought to control the press, and the change of style from the 1998 conference, when many primates had also had places on the podium. In 2008, Duncan said, the Archbishop of Canterbury alone dominated the formal proceedings.

Concerning the work of the Windsor Continuation Group, Duncan said that the proposal made during the Lambeth Conference for a "holding tank" was published without any consultation with those directly affected, and was for all of them "a bridge too far." While continuing to work with WCG and other such groups, he was "not prepared to commit all my trust to them."

Discussing the unfolding situation in Pittsburgh, Duncan confirmed that he expected "around 20" parishes would remain with TEC and not participate in the Southern Cone re-alignment. The reduced income would inevitably lead to diocesan budget cuts. "We will suffer," Duncan said. Asked about the potential confusion caused by retention of the word "Episcopal" in the name of both the reorganised TEC diocese and the Southern Cone aligned diocese, insisted there was no question of changing the name of the latter to "Anglican," as happened in the case of San Joaquin, a diocese in California that also voted to join the Southern Cone and changed its name to the Anglican Diocese of San Joaquin. The continuing diocese in communion with the Episcopal Church uses the name "Episcopal Diocese of San Joaquin."

"TEC has no lockup on the name Episcopal," Duncan said.

Concerning his own status, Duncan said that he expects to be re-elected as diocesan bishop at the 7 November special convention. Meanwhile, he said, he was gratified by the number of Primates and English bishops, who had publicly stated that they did not accept TEC's deposition of him as valid. Six English diocesan bishops (those of Blackburn, Chester, Chichester, Exeter, Rochester, and Winchester) have signed a public letter, saying "We declare that we continue to believe that Bishop Bob is a bishop in the Church of God and a bishop in good standing in the Anglican Communion".

Duncan said that Primates who attended the Global Anglican Futures Conference (GAFCON), a June meeting in Jordan of Anglican bishops and others who disapprove of such innovations as the blessing of same-sex unions and the ordination of gay clergy, have also refused to recognize his deposition. Mouneer Anis, Presiding Bishop of Jerusalem and the Middle East, and Archbishop John Chew of South East Asia had both expressed support, he added. Duncan noted that Anis had compared him to "St. Athanasius, who as Bishop of Alexandria, was deposed and exiled from his see."

Duncan stressed that arrangements with the Province of the Southern Cone were not intended to be permanent, and he strongly advocated the establishment of a second Anglican province in North America. This, he said, would be an improvement over the current situation, as it would lead to the cessation of all current "interprovincial" interventions in both the USA and Canada. He accepted that the formation of such a province would require the approval of the Anglican Consultative Council, and as moderator of Common Cause he said he was happy to work with the various structures of the Anglican Communion to achieve this.

Noting that the GAFCON primates planned to meet again before the end of 2008, Duncan said that the Common Cause Partnership, which he said now includes 30 bishops, 800 clergy, 700 parishes and about 100,000 regular Sunday worshippers, would submit a proposal for such a province to them. The official meeting of Primates (a title given leading archbishops or presiding bishops of the Anglican Communion's provinces) will be held early in 2009. The Anglican Consultative Council, which consists of lay and clergy representatives of the provinces, will meet in May 2009.

--Simon Sarmiento is websexton for the Church of England’s Diocese in Europe, and is United Kingdom/Europe editor of Anglicans Online.
Posted by Elizabeth Kaeton at 9:14 AM