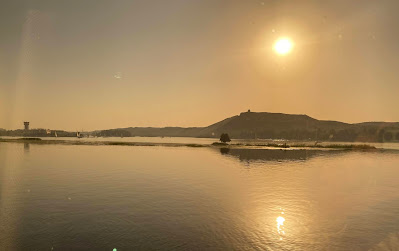 Sunset on the Nile

I've been home twenty four hours after a week in Egypt. Time-wise, my body is still somewhere over the middle of the Atlantic Ocean. Jet lag is the only thing worse than modern air transportation.
As I've unpacked and washed all the clothing I brought to Egypt, I realized that, for once, I did not over pack. Oh, there could have been one or two less blouses and I really only needed one pair of jeans instead of two, but I think I've got this packing thing down. I started with a check-on bag that weighed 16 kg and returned with that same bag weighing 18 kg. Not bad and still well under the 50 pound limit.
What can't be weighed or measured are the memories I've brought home.
Here are some random thoughts/impressions I didn't have time to note on my daily Facebook posts:
As one who operates from the perspective of feminist liberation theology, one of the questions I always start with is: Who has the power?
There is absolutely no doubt that the answer to that question is men.
I suppose that shouldn't be a surprise. Egypt is part of Africa, the Middle East and Arabia, not one of those cultures is exactly a bastion of feminism.  More women wear full niqab or burka and hijab than not. The visible presence on the streets of any city in Egypt is overwhelmingly male.
FGM (female genital mutilation) is still widespread - although increasingly condemned - in Egypt. In June of 2008, FGM was made illegal. However, a 2014 national survey revealed that 92% of Egyptian women aged 15-49 had undergone FGM, 72% by a doctor. It should be no surprise that, as yet, no one has been convicted of performing FGM.

I wish I had had more time to talk to more Egyptian women about how they see themselves and their status in this culture.  It is significant, I think, that the great nation of Egypt fell under the reign of Cleopatra - which is a title, not a name. The Cleopatra we know was the seventh (some insist her name was Elizabeth Taylor). It seems as if Egypt has not forgiven that woman for their loss of stature.

I wondered what it must be like to live in the midst of so much ancient history, to be constantly reminded of the glory and splendor that was once Egypt. How does it shape and form your sense of identity to know that your eyes are beholding the same pyramids and sphinx and tombs that Moses and Joseph saw? How are the stories of the ancient Egyptian Gods regarded by a people, 90% of whom are devout Muslim?

One is keenly aware of the poverty - 45% of the people of Egypt lives on less than the equivalent of $2 per day. And yet, there were no visible 'homeless' on the streets of Cairo or Aswan, Luxor or Memphis.

The merchants, however, are aggressive. Very. Aggressive. They follow you, hovering over you with their wares, repeating phrases in English they've no doubt heard many times before: "Not now? Maybe later?" I found that putting my hands together in prayer, bowing slightly and respectfully, lowering my eyes and saying, "No thank you," was a pretty effective deterrent.

We were advised to bring $200 in $1 bills and I'm glad we were. Tipping is big in Egypt. No, I mean, you tip for everything. Going to the bathroom allows three people entry for $1, which also entitles you to a small amount of toilet paper. There's no 'charge' for use of the toilet, but you are still expected to tip.

When I remembered that half the people in Egypt live on $2 per day, it put my tipping into perspective.

It makes me wonder about the poverty in our own country.

I also learned that there is absolutely no way I could ever live in a place where temperatures soar into the 100-125 F when it's not even summer! The fact that it was 'dry' heat did not make a whit of difference. I can not tolerate that kind of heat.

I don't think I can look at another statue of an Egyptian pharaoh or king or military person without remembering that there is important significance to his leading with his left leg. The heart is on the left side of the body, so it is said that a leader leads with his heart, always ready to stamp out evil.

I've been consciously aware of leading with my left foot when I walk, and trying to remember to lead with my heart.

There are so many more memories that have store themselves under my skin, in my heart, and into the muscles of my body, that I'm sure will continue to reveal themselves over the next  weeks and months.

Right now, I'm just awash in gratitude for having been able to be in Egypt, on the Nile, with the people whose origins can be traced back centuries.

I have been changed in ways subtle and profound.

Posted by Elizabeth Kaeton at 8:31 PM