My first view of Porto, across the bridge, at 6 PM

Good Saturday morning, comrades! It's the first day of October and I think the worst of jet lag is behind me. I am writing you from the beautiful city of Porto, Portugal where "a river runs through it" and the city is a very hip mixture of old European charm with modern international accommodation.

The church where I hope to attend mass early tomorrow morning is St. John's, which bills itself as "an International Church in the Anglican Tradition".

At least, I hope to attend early mass. Tomorrow morning at 9:30 AM, I am leaving with some pilgrims I just met to check out the Douro River Valley.
We will be visiting two different wineries and doing some wine tasting at Quinta do Seixo - and having lunch there - and Quinta da Roeda. In between, we'll cruise the Douro River in a typical "Rabelo" boat.

I couldn't be more excited.

Today, I'm going to explore more of the city of Porto. I hope to meet up with the friend of a mutual friend for a bit of an afternoon tea.
Tonight, I meet up with my fellow Peregrino/a at 5:30 and we will walk to a theater not far from here to attend a wonderful (or so I hear) Fado Concert.

Fado pronounced: [ˈfaðu]; "destiny, fate") is a music genre that can be traced to the 1820s in Lisbon, Portugal, but probably has much earlier origins. Fado can be about anything but must follow a certain traditional structure. It is a form of music characterized by mournful tunes and lyrics, often about the sea or the life of the poor, and infused with a sentiment of resignation, fate and melancholy.
You can hear the influence of the Mores and the laments of the sea in every note.

It is the musical expression of "Saudade" that some who read this page or my blog may remember. It is a longing, symbolizing a feeling of loss (a permanent, irreparable loss and its consequent lifelong damage). 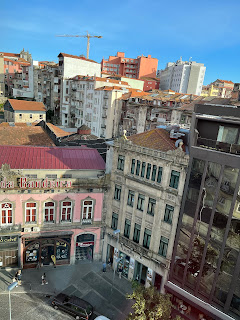 My grandmother played her guitara and sang Fado, something of which my grandfather was very proud, not only because of her beautiful voice and soulful playing but because, under the growing conservative regime that birthed the dictatorship of Salazar, and aided and abetted by the (Roman Catholic) church, at one point in time and in some towns, only men could sing Fado.

But, there was always this longing for "the old country" - like the Israelites having been blessed with liberation from slavery and headed for The Promised Land but longing for the pomegranates in Egypt.

So, it's off into my day. I'm so excited to have conversations with people on the streets and in cafes. I want to learn more of why people from America seem to settle here.

I am already learning that Fr. Koumranian was right and "people is people" all over the world. My hostess at breakfast was a young woman named Rita, who talked about the Great Rush at 7:30 AM of "bus loads" of people - so many she couldn't seat them all at the same time. "So, what I'm going to do? I give them place in line. When one table finish, I fast clean, clean, clean and then another four people sit. Whew!"

I said, "Well, when you go home, you'll put your feet up and rest with a nice cup of tea." 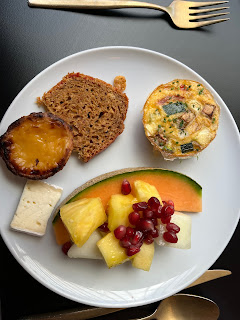 It was ever thus, eh Ladies?

Make it a great day, everyone.

Barco Negro (Black (sail) boat) Translation
(The lament is "They are crazy")
In the morning, how I feared that you could find me ugly
I woke up trembling, laid on the beach's sand

I know, my love, that you, in fact, did not leave
because, everything around me tells me that you are always with me

You are in the wind, which spreads sand on the glass (of the windows)
You are in the water, that sings into the dying fire
You are in the warmth of the rest from empty seabeds
You are forever with me, into my heart/chest.
Posted by Elizabeth Kaeton at 7:16 AM