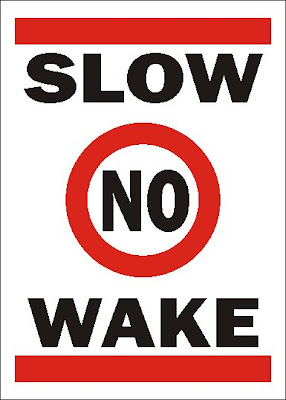 Out in the channel in front of my house, there is a sign 'planted' in the marsh. It pokes its head up above the growing sea grass and sometimes serves as a perch for sea gulls and other birds.

"Slow No Wake" it reads.

I'm taking it as a message for General Convention.

For those of you who may have spent most of your life 'landlocked' and don't know what this means, let me explain, which may help you understand.

A 'wake' is the water that gets displaced as a boat makes its way through the water. Think of it as a 'water plow' of sorts. The faster you go, the more water gets displaced, causing ripples and waves that can make the water very choppy for others.

If you go too fast, and if your boat is small, the wake you create can become so strong that you can also capsize and end up in the water instead of on it.

The slower you go, the waves and commotion you cause for others who come after you - or those of us who live here on the water - can be equally dangerous.

No, I'm not talking about this as a metaphor for the legislative process or the progress of our ultimate goals for 'all the sacraments for all the baptized'.

So much of the 'strategy' or 'plan' for General Convention is about cultivating relationships in community. The success we've had over the past 35 years of IntegrityUSA and 12 years of Claiming the Blessing - indeed, for any of the justice organizations in The Episcopal Church - have had to do with this one seemingly simple yet very powerful dynamic.

That takes the risk of vulnerability. For everyone. On all sides.

It takes patience - not exactly my strong suit - and confidence in the belief that "with God, all things are possible."

It means traveling to what Martin Smith once called the 'crucifyingly obscure' boundaries of our faith.

That takes time, and it has taken us 35 years to get to this place. We are not yet where we need to be, but we are on our way.

I'm using the sign outside my front door as a metaphor for my own pace during the 10 days of General Convention.

The 'stimulation' of being with thousands of other Episcopalians can be overwhelming. The fast pace and jam-packed days of General Convention can be dizzying.

If I am to make it through with some semblance of my integrity, intelligence, imagination, hope, faith, spirituality and sense of community intact, I need to remember "Slow No Wake".

I also need to remember the words of a sign on one of the many small, non-denominational evangelical churches that are in my neighborhood. It said:

"The task of moving a mountain begins with lifting up the first stone."

We haven't completely moved the entire mountain of prejudice that has existed for women, people of color and LGBT people, and so many others since before time. There are still many, many more stones to move.

One stone, one day at a time.

Sometimes, one stone per Triennium.

Oh, and if you want one watermark of how far we've come and how we've done it click here to listen to the sermon delivered by Louie Crew at IntegrityUSA Triennial's Eucharist in 1994.

It will be FABULOUS!!

My new song is "Ain't gonna let nobody turn me around. Keep on a walkin', keep on a talkin', gone a build a brand new world" - one stone at a time.
Posted by Elizabeth Kaeton at 9:10 AM

Aw, heck!~ I thought it meant no one would disturb my nap when I come to visit!

I do look forward to your blogging during GC.