All Hallow's Eve: It's Elementary 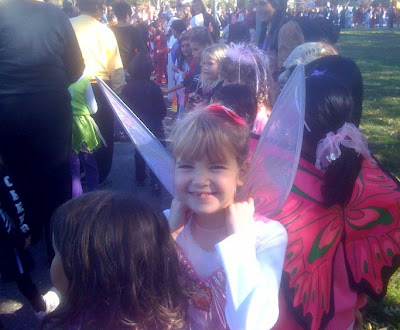 What do you do when you are seven years old and and you have a snaggle-tooth and don't feel so very pretty?

You become the prettiest Snaggle-Toothed Fairy on All Hallow's Eve, that's what! And to this Nana's eyes, she's the prettiest Fairy ever!

I went to Mackie's Halloween Parade today. It was too cute for words. Honestly!

So, if you have an aversion to sweetness, just move on. Or, scroll down to the last picture to see how this little one is becoming quite a poet. 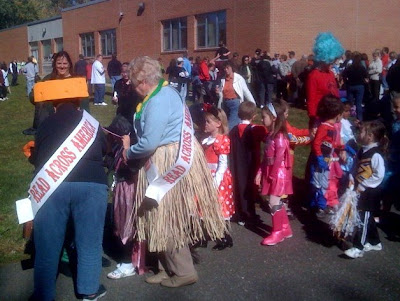 It began with the littlest ones, being led by their teachers who were dressed up en costume as well, but with a State theme, like beauty queens, except their sashes were "Read Across America."

In the above picture, you can see Wisconsin (with the Cheese on her head) and Hawai'i. I must admit, I had to look twice at some of the teachers. They looked - and acted and sounded - EXACTLY like the teachers I had in Elementary School.

Do they freeze-dry them and then recycle them or do they all come from "Central Casting"? Amazing! 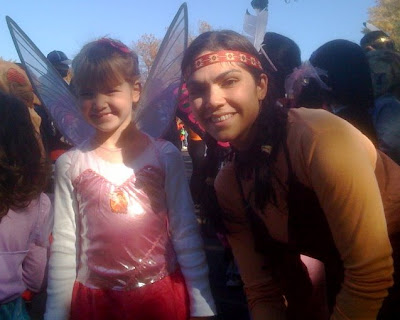 Here's Mackie with her teacher, representing the First Nation people. "We don't call them "Indians" any more, Nana," she said sternly. "My friend, Nola, is from India," she exclaimed, "so SHE'S Indian."

"The people we used to call 'Indians' we NOW call 'First Nation People' or, you can just say, 'First People'. You know why?"

"Because, Nana," she said, she gasped in that seven-year-old way of being dramatic to underscore the point, "They were here FIRST. See?"

"Yes," she said, adding with no small amount of modesty, "My generation is going to change the world, you know."

I have no doubt, absolutely no doubt at all. 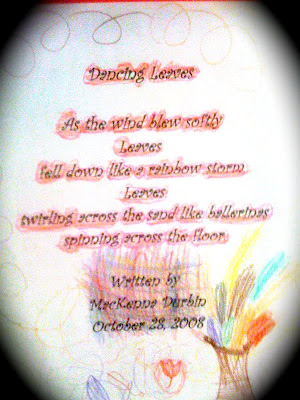 When I walked her back to her classroom, I found this hanging on the wall. You should know that Mackie recently started ballet lessons, which, she tells me she, "Loves, loves, LOVES!"

It's called "Dancing Leaves." I think it's quite brilliant, don't you?

As the wind blew softly
leaves
fell down like a rainbow storm
leaves
twirling across the storm like ballerinas
spinning across the floor.
Posted by Elizabeth Kaeton at 5:19 PM

Bless that sweet child - and that poem, just lovely.

Oh, Fran, this sweet child is a blessing to us all. She makes us smile. A very big smile. All the time. (Ok - most of the time - when she's not having a meltdown over a 'bad hair day'. Right. The apple doesn't fall far from the tree, but I'd like to think of that in terms of poetry.)

This poem makes me feel hopeful about getting the world changed. Her generation just may get it done.

Yes, Maddy. This blog standard occasionally meets those of the family value network. But, you wouldn't know anything about that (thanks be to God!), which is why everyone is always in YOUR neighborhood.

I was pleased to see that Miss Mackie did not want to dress up as Hannah Montana. All 3 of the little girls I work with up here, either as a mentor or a reading assistant, wanted to be HM. Oh well, Halloween is for kids-of all ages-so I just smiled sweetly at them.

Well, her mother said that HM was her first "idea" but she was easily swayed. I didn't see too many of them in the Parade, which made me feel better, until I realized that no one really wanted to come looking like anyone else. Except the boys - there were more gholish faces dressed in all black and RoboCops than I could count. Sigh.