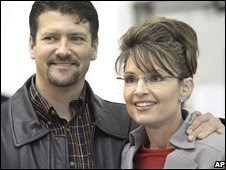 Alaska Governor Sarah Palin is guilty of abuse of power, according to a probe by the state legislature.

The Republican vice-presidential candidate was accused of sacking a senior state official, Walter Monegan, in connection with a family feud.

But the McCain-Palin campaign team said that the report showed Mrs Palin acted within "proper and lawful authority".

The report could have a significant effect on Republican hopes of winning next month's US presidential election.

Mrs Palin has always denied any wrongdoing, and her supporters say the charges are motivated by her political opponents.

She stood accused of dismissing Mr Monegan for refusing to sack a state trooper who was in a bitter custody battle with her sister.

The report concluded a family grudge was not the sole reason for the dismissal, but was a likely contributing factor.

Speaking after a bipartisan investigating panel reached its decision on what has become known as Troopergate, Mr Monegan said he felt "vindicated".

"It sounds like they've validated my belief and opinions," he said. "And that tells me I'm not totally out in left field."

The panel found Mrs Palin in violation of a state ethics law prohibiting public officials from using their office for personal gain.

"I find that Governor Sarah Palin abused her power by violating Alaska Statute 39.52.110 (a) of the Alaska Executive Branch Ethics Act," investigator Steve Branchflower concluded in the panel's 263-page report.

But Mrs Palin's lawyer said that the report had not been conclusive.

"In order to violate the ethics law, there has to be some personal gain," said Thomas Van Flein.

"Mr Branchflower has failed to identify any financial gain."

And Alaskan state Senator Gary Stevens, a Republican, said there were "some problems" with the finding.

"I would encourage people to be very cautious, to look at this with a jaundiced eye," said Senator Stevens, after the report's release was announced.

Several Republican politicians had earlier attempted to have the investigation stopped on the grounds that it was politically motivated.

The investigation into the affair began before Mr McCain selected Mrs Palin as his running mate in August.

The US presidential race has now become so polarised both Republicans and Democrats will likely see the report's findings as vindication for their own trenchant views about Mrs Palin, says the BBC's Richard Lister in Washington.

Alaska's governor will either be seen as the victim of a Democratic party hatchet job, or a hypocrite.

Most voters, for now at least, seem more concerned about who will extract them from the current economic crisis, than any questions about political infighting in far-off Alaska, our correspondent adds.

Mrs Palin maintains she fired Mr Monegan in July over a budgetary dispute.

Mr Monegan said he simply wanted the truth to be made known.

"The governor did want me to fire [Mr Wooten], and I chose to not," he told the Associated Press news agency.

"He didn't do anything under my watch to result in termination."

Todd Palin has admitted he did publicise what he called the "injustice of a violent trooper keeping his badge".

But he said his wife, who did not give evidence to the enquiry, then told him to drop the matter.

The McCain campaign on Thursday issued its own report, written by its staff, stating that the Alaska governor was not guilty of any wrongdoing.

"The following document will prove Walt Monegan's dismissal was a result of his insubordination and budgetary clashes with Governor Palin and her administrators," campaign officials wrote. "Trooper Wooten is a separate issue."

The 21-page report suggests that the allegations against Mrs Palin stem from a conspiracy planned by a former campaign opponent of hers, Andrew Halcro, and Mr Wooten.

"It is tragic that a false story hatched by a blogger over drinks with Trooper Wooten led the legislature to allocate over $100,000 of public money to be spent in what has become a politically-driven investigation," it concludes.

The McCain campaign says the inquiry has been muddied by innuendo, rumour and partisan politics.
Story from BBC NEWS:
http://news.bbc.co.uk/go/pr/fr/-/2/hi/americas/7662820.stm