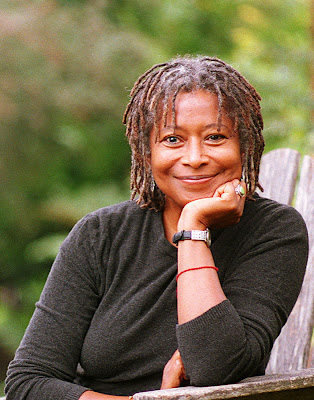 In addition to being Domestic Violence Awareness Month, October is also LGBT History Month. If you got to this website, you can check out the lives of 31 LGBT people who have made significant contributions to our world - from artists, to Olympians, to government leaders.

It's a wonderful counterpoint to the tragic murder of Matthew Shepherd. We will commemorate the 10th (!!) anniversary of his death on October 12 - just one day after National Coming Out Day on October 11th (Happy Birthday, Jon! ;~>).

One teeny-tiny complaint about the site: It's called "GLBT History Month" and I really, really wish they had organized the letters so the "L" was first. It would be, for me, a recognition of the double prejudice women endure - an acknowledgment that male privilege is still operative in our culture and an understanding that the root cause of homophobia and heterosexism is sexism and misogyny.

Today, I am highlighting one of my s/heroes in Our Tribe, but I know you'll enjoy reading the biographies of all the brave LGBT people who make us all proud.

“The truest and most enduring impulse I have is simply to write.”

Alice Walker is an award-winning writer, activist and self-proclaimed “Womanist”—a term she coined in her book “In Search of Our Mother’s Gardens” (1974) to describe black feminists. The voices she brings to life in her novels, short stories and poems helped educate and inspire readers.

Walker was raised in Eatonton, Georgia, during segregation. She was the youngest of eight children born to poor sharecroppers.

Walker received her B.A. from Sarah Lawrence College in 1965. She moved back to the South to pursue civil rights work and met Mel Leventhal. Walker and Leventhal, a Jewish civil rights lawyer, were the first interracial couple to be legally married in Mississippi. Walker had her only child during the marriage. The couple divorced in 1976.

Walker began teaching at Wellesley College in 1972. Her course, dedicated to the study of African-American women writers, was the first of its kind.

Her most famous novel, “The Color Purple” (1983), won a National Book Award and made Walker the first African-American woman to receive a Pulitzer Prize for Fiction. In 1985, the novel was made into a movie directed by Steven Spielberg, starring Oprah Winfrey, Whoopi Goldberg and Danny Glover. The film earned 11 Oscar nominations. In 2005, “The Color Purple” was adapted as a Broadway musical, with Winfrey as the lead financial backer.

Walker’s awards include a Guggenheim Foundation Grant, an American Book Award, a Lillian Smith Award and an O’Henry Award. She was inducted into the Georgia Writer’s Hall of Fame and the California Hall of Fame. In 1997, Walker was named Humanist of the Year by the American Humanist Association.
Posted by Elizabeth Kaeton at 9:06 AM

LGBTQQXYZM-I-C-K-E-Y-M-O-U-S-E
Your church is so flaming-and as predictable politcally as Falwell!
You deserve each other.
Alice Walker should have been a better mother.

You know, Fred, I almost hit "reject" on this comment, and then thought better of it. I couldn't damn you any better than your own words.

Thank you for the post, Elizabeth. I always enjoy your blog.

One note of correction, however...

National Coming Out Day is October 11th! I take great pride in having my birthday share that great day!!