Common Dreams: We Need to Act 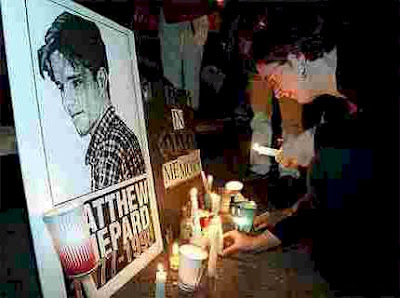 Published on Sunday, October 5, 2008
by The Progressive
Ten Years After Matthew Shepard’s Murder, We Need to Act

It has been 10 years since openly gay college student Matthew Shepard was brutally killed in Wyoming. On Oct. 6, 1998, he was beaten and strung up on a fence. He died six days later.

Unfortunately, little has been done to curb such attacks, and elected leaders at the state and federal level are largely missing-in-action when it comes to protecting our lesbian, gay, bisexual and transgender (LGBT) loved ones.

The need for the law is as urgent now as it was in 1998. Hate crimes against the LGBT community increased 24 percent nationwide last year, according to the National Coalition of Anti-Violence Programs. Especially startling increases occurred in Michigan (up 207 percent), Minnesota (up 135 percent) and even in Los Angeles, which saw a 100 percent increase in anti-gay violence in 2007.

In California, student Lawrence King was gunned down in his school by a classmate who believed King was gay.

In Colorado, Angie Zapata, a young transgender woman, was attacked and killed while on a date.

In South Carolina, Sean Kennedy was viciously beaten outside a local gay bar, and later died from his injuries.

And right now, in the nation's capital, the gay community is on heightened alert following at least three anti-gay attacks in neighborhoods generally considered safe for LGBT Washingtonians.

Those numbers, and those stories, should shock Americans and spur them to take action.

Parents, Families and Friends of Lesbians and Gays (PFLAG) recently partnered with Sean Kennedy's mother to launch a petition calling on lawmakers to pass, and President Bush to sign, the Matthew Shepard Act.

The bill would provide much-needed assistance to state and local law enforcement agencies in investigating and prosecuting violent, bias-motivated crimes. Virtually every major law enforcement organization in the country has endorsed the bill, including the International Association of Chiefs of Police, the National District Attorneys Association, the National Sheriffs Association, the Police Executive Research Forum, and 31 state attorneys general.

Our country cannot wait another decade, and endure countless more attacks on our families, before Congress takes action.

In Matthew Shepard's name, let's get it done.

Copyright 2008 The Progressive Magazine
Steve Ralls is communications director for PFLAG. He can be reached at pmproj@progressive.org.

Thank you for the link. It speaks to something I have been concerned about regarding some reports from Lambeth.

At a recent clergy day our bishop reported on his time at Lambeth. He mentioned that some of the bishops there had spoken about people being killed because Christians in the West are seen as supporting GLBTs. When he said this statement and when I first read it on the internet during Lambeth it seemed like it was being used to speak to the idea of no more progress on full inclusion. I have grave concerns about that because it ignores the consequences for GLBTs in our own countries.

Elizabeth,
Thank you for reminding us about Matthew. We were in New Jersey 10 years ago and I went to the Memorial Servce at St John the Divine. One of the most moving acts of worship I have ever been to.

We all had candles which we lit from the front of the vast cathedral as we sang "This little light of mine ... I'm going to make it shine."

I don't know how well I have lived up to the challenge i set myself that day, but with God's grace I do my best.

With love from the UK and happy memories of your visit

Hello Ann Marie. I think you're absolutely correct on the intention of that statement that goes, "Every time we say a positive word about LGBT people, another Christian dies."

It's one of the sickest manifestations of homophobia and heterosexism I've seen - and I've been around for a while.

It was an awful day, wasn't it, Mark? I remember keeping vigil, praying that he would live and then, as the reports came of his condition, praying he would die a peaceful death. The real horror is that this kind of tragedy continues - and will continue as long as the Church keeps Hate Speech alive.

Thanks for being such an important friend and supporter in the cause of justice. My love to your family.