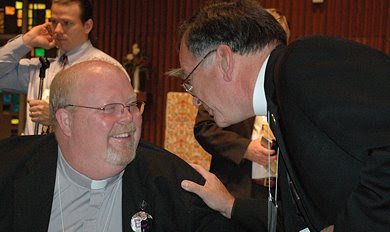 ENS Photo: Deposed Bishop Robert Duncan speaks with
President of Standing Committee, David Wilson
Well, it is finished. And, it has just begun.

There is something of an odd relief about this all for me. A sort of sadness mixed with relief. I suppose it can be compared to the emotional stew one is in when one has been on Hospice bed watch.

Let's keep all the folk in Pittsburgh - on both sides of the aisle - in our prayers.

Deputies to the 143rd diocesan convention of the Episcopal Diocese of Pittsburgh voted to realign the diocese with the Anglican Province of the Southern Cone.

The vote came quickly after the convention gave the second required approval to constitutional changes that removed all mention of the Episcopal Church.

"I believe that the vast majority of Episcopalians and Anglicans will be intensely grieved by the actions of individuals who thought it necessary to remove them from The Episcopal Church," Presiding Bishop Katharine Jefferts Schori said after the vote. "I have repeatedly reassured Episcopalians that there is abundant room for dissent within this Church, and that loyal opposition is a long and honored tradition within Anglicanism. Schism is not, having frequently been seen as a more egregious error than charges of heresy. There is room in this Church for all who desire to be members of it. The actions of the former bishop of Pittsburgh, and some lay and clergy leaders, have removed themselves from this Church; the rest of the Church laments their departure. We stand ready to welcome the return of any who wish to rejoin this part of the Body of Christ.

"We will work with remaining Episcopalians in Pittsburgh to provide support as they reorganize the Diocese and call a bishop to provide episcopal ministry. The people of The Episcopal Church hold all concerned in our prayers -- for healing and comfort in time of distress, and for discernment as they seek their way into the future.

"The mission of God, in which The Episcopal Church participates, is to love God and to love our neighbors as ourselves. We cannot do one without doing the other. We believe that it is in serving the least among us that we discover the image of God, and the presence of a suffering Christ. It is in serving those least that we rediscover our common mission, which transcends our differences. Jesus weeps at the bickering of his brothers and sisters, particularly when they miss him in their midst."

Deposed Pittsburgh Bishop Robert Duncan sat with convention officials in the chancel of St. Martin's Episcopal Church in Monroeville from the beginning of the convention. The Rev. Jonathan Millard, rector of the Church of the Ascension in Oakland, Pennsylvania, was elected to run the convention in the absence of a sitting bishop.

A fuller version of this story will be released later today.
Posted by Elizabeth Kaeton at 2:04 PM