October: An End to Violence 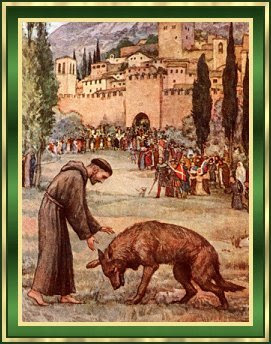 It may seem odd to some, at first.

October begins with the observance of St. Francis, the man whose life has become to be a symbol of peace in the world through the reconciliation and celebration of all of God's creatures and creation.

The story told of St. Francis and the Wolf of Gubbio stands as a parable of sorts to end violence.

So, it is not so very strange that October is also the month when efforts are made to increase awareness about violence - the domestic violence experienced by women and children in their own homes as well as the violence experienced as Hate Crimes based racial, religious, ethnic, sexual orientation or disability prejudice.

I took a peek at some of the statistics compiled by the FBI in terms of Hate Crimes.

Here is a more in-depth look at the 2006 statistics.

An analysis of the 7,720 single-bias incidents reported in 2006 reveals the following:

* 51.8 percent were racially motivated.
* 18.9 percent were motivated by religious bias.
* 15.5 percent resulted from sexual-orientation bias.
* 12.7 percent stemmed from ethnicity/national origin bias.
* 1.0 percent were prompted by disability bias. (Based on Table 1.)

In 2006, law enforcement agencies reported 1,415 hate crime offenses based on sexual- orientation bias. Of these offenses:

And, who are the offenders?

An analysis of available race data for the 7,330 known hate crime offenders revealed that:

Interestingly enough, the FBI does not include "gender" in its definition of a hate crime, so there were no statistics there in terms of sexual assault or incidences of domestic violence.

You can find those sobering statistics at AARDVARC, Family Violence Prevention Fund, and the National Coalition Against Domestic Violence which compiles statistics on all of the different forms of abuse and violence - from physical to sexual assault, to psychological and economic abuse and differentiates the victims of violence from adult women and men, the elderly and children.

Throughout October, I will be posting some statistics on some aspect of violence and hate crimes as a discipline of increasing awareness for myself.

It seems fitting, however, to begin with the Prayer attributed to St. Francis:

O Divine Master,
grant that I may not so much seek to be consoled as to console;
to be understood, as to understand;
to be loved, as to love;
for it is in giving that we receive,
it is in pardoning that we are pardoned,
and it is in dying that we are born to Eternal Life.

Amen.
Posted by Elizabeth Kaeton at 11:13 AM