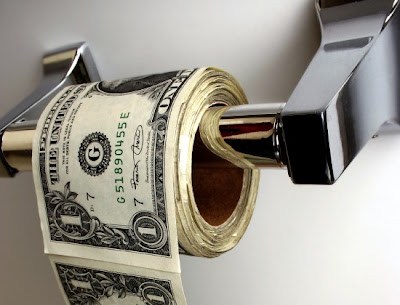 There's an interesting if not scary article in the NY Times this morning, "A Day (Gasp) Like Any Other" by Joe Nocera, who says, "This crisis doesn’t wear you down over time. It hits you over the head with a two-by-four on a daily basis."

And then there's this one "Global Fears of a Recession Grow Stronger," by Mark Landler, who writes, "Three days after the approval of the White House’s $700 billion rescue plan, it looks like a pebble tossed into a churning sea."

But, it was this one, published in Common Dreams, that hit me like Nocera's daily financial two-by-four.

The connection between the budget for the War in Iraq and Afghanistan and this financial bail out are simply breathtaking.

In fact, I'm writing the Obama Campaign right now to tell them that. They have no trouble asking me for "even $5". Even if I never gave them a cent, I think I have the right to hear more than what has amounted to verbal foreplay and posturing.

I hope you will write your candidate's office, too. We need 'straight' answers to difficult questions.

The old saying from the '60's was never more apt: "If you aren't outraged, you are not paying attention."

Making Some Sense of $700 Billion

by James Carroll
Published on Monday, October 6, 2008 by The Boston Globe

How much is 700 billion? The mind registers the number with such imprecision as to make it meaningless. One blogger proposed this way of grasping the figure: As a stack of $100 bills, it would reach 54 miles high. But who can imagine that? On the other hand, someone at the Smithsonian once calculated that counting to one billion, at the rate of one digit per second, would take 30 years. By that scale, counting to 700 billion would take 21,000 years.

Come again? That stretch of time takes us back to the cave painters of Lascaux, the glacial age, the last Neanderthals. The mind is not helped.

By a nice coincidence, though, the financial rescue package of $700 billion duplicates a number that was also in the news last week - the Pentagon budget. In the fiscal year just beginning, the Defense Department will spend $607 billion on normal military costs, and an additional $100 billion on the wars in Iraq and Afghanistan. (As of June 30, 2008, Congress had appropriated $859 billion for the wars; Congressional Budget Office projections assume further costs of $400 billion to $500 billion as the wars wind down). But for the coming year, $700 billion is the Pentagon's nice round number (this includes neither Homeland Security nor intelligence costs).

Step back. All of last week's hand-wringing hoopla over the emergency bailout stands in stark contrast to the utter indifference with which politicians approved an equivalent layout for the military - an approval so routine that it was ignored in the press and by the public.

Barack Obama has no issue with current Defense expenditures. The annual American military budget is at least 10 times larger than the military budgets of Russia and China; it is 20 times larger than the entire budget of the US State Department. But last week's demonstration of anguish over the historic financial rescue figure throws an entirely new light on the nearly identical number that will fund the Pentagon for one measly year.

This is not a matter merely of comparison. Here is the question that no one is asking about America's grave financial crisis: By fueling corporate profits, jobs, and private-sector growth for two generations with massive over-investment in the military, has the United States gutted the real worth of its economy?

One needn't be an economist to know that spending money on war planes, missiles, and exotic weapons systems, not to mention combat operations, creates far less social capital than spending on education, bridges, mass transit, new forms of energy - even the arts.

The genius of this nation's most brilliant minds has been yoked for more than half a century to the invention of ways to kill and destroy. ("I saw the best minds of my generation destroyed by madness." - Allen Ginsberg's "Howl," 1956) What if those minds had been put to work imagining alternative futures - the rescue of the environment, the ending of disease and poverty, the artistic fulfillment of new media, the teaching of children? It's a question as old as Eisenhower ("The cost of one modern heavy bomber," he said in 1953, "is this: a modern brick school in more than 30 cities." Leaving office, he said, "We cannot mortgage the material assets of our grandchildren without risking the loss also of their political and spiritual heritage." That's us.)

The $700 billion bailout aims to rescue the world's economy, but that, too, raises questions about the Pentagon's prior effect there. Because America has put military invention at the heart of its enterprise, the exporting of weapons to countries that do not need them and cannot afford them has become a main mode of this nation's being in the world. (The Arms Control Association reports that in 2007 the Pentagon sent $40 billion worth of arms to two dozen nations; that is double the 2007 appropriation for US foreign aid.) Unneeded weapons spark unnecessary wars.

That the majority of humans are in dire straits and that the planet itself is groaning are issues treated like givens of nature, yet they are results of the ways creativity is channeled and resources are shared. $700 billion for rescue. $700 billion for war. Something is wrong with this picture, and last week that coincidence of numbers told us what.

Article printed from www.CommonDreams.org
URL to article: http://www.commondreams.org/view/2008/10/06-5
Posted by Elizabeth Kaeton at 8:18 AM

This whole thing makes me want to scream at someone. We are in the midst of a major economic meltdown, and the candidates (both of them) ar busy releasing guilt by association ads.