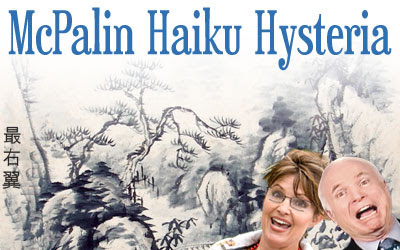 This is a great way to work off your frustration, anger and/or anxiety with some creative energy.

What is a Haiku?

A haiku is an unrhymed verse/poetry form of Japanese origin having three lines containing usually five, seven and five syllables respectively. Intended to convey a vivid impression poetically in only seventeen syllables, haikus have traditionally focused on nature — but our goal is to spread a very important election year message:

* Entries must be submitted online, using the form provided.
* Each contestant may submit up to three entries.
* All valid entries must be received by Wednesday, October 15 at midnight.
* Haikus will be judged on the following criteria:
o Connects Sarah Palin and/or John McCain to the Far Right or to what's at stake this election, OR
o Makes the connection between the 2008 Election and the future of the Supreme Court

Here are some samples:

McCain on judges:
“I like all the ones Bush picked.”
We're in trouble, now.


Driving our nation
Over a bridge to nowhere
Thats McCain-Palin

You can submit your Haiku here.

Find out more about People of the American Way here: