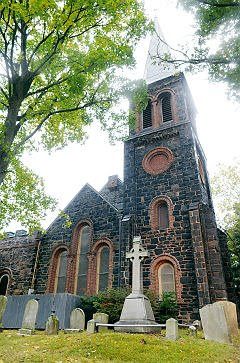 A Staten Island church with some weird vibes has thrown open its doors - to ghost busters.

The Eastern Paranormal Investigation Center is investigating St. Andrew's Episcopal Church for evidence of otherworldly visitors, and the results are due just in time for Halloween.

"There is definitely something going on here. It's that feeling you get when your hair stands up," said St. Andrew's pastor, the Rev. Michael Delaney.

The ghost busters, who are based in Staten Island, requested a probe last year after hearing about strange goings-on at the church and asked to do a second investigation last week, according to Delaney.

Their last findings were convincing, he said.

A DVD of what they taped during their night at the church showed heavy chimes that are difficult to move ringing on their own.

"All of a sudden the chimes were ringing. The candle over the tabernacle was dancing like there was a major wind. But there was no wind. And we heard what sounded like a tin dish hitting the floor," recalled Delaney.

"Ions are like food for ghosts. They use a prevalent amount of ions to show themselves," Arthur Matos, the group's co-founder told the Staten Island Advance.

He pegged midnight to 3 a.m. as St. Andrew's "witching hour."

The most recent findings are expected to be posted on the group's Web site, epicparanormal.com, in the coming days.

They've worked on numerous homes and well-known haunts like the Bridge Cafe in lower Manhattan, a former brothel where politicians now dine.

Their probe of the eatery last year found nothing unexplained, according to its Web site.
Posted by Elizabeth Kaeton at 9:28 PM

Hmm, why hasn't he called in his bishop to do an exorcism??? I can just see +Jay Walker doing casting out. Rector's got a couple of buttons missing on his soutain.

I know Michael Delaney. He was a seminarian with Tracey Lind. He's also a former RC who played piano and organ in RC churches. He's quite brilliant and creative and wonderful.

There was also a BIG story a few years back about how he had started a Pet Cemetery on the church grounds.

Me thinks Michael has learned a few things about Evangelism 101 from Dean Lind.