Advent I: Bishop Shaw takes the first 'pastorally generous' step toward Marriage Equality in The Episcopal Diocese of Massachusetts 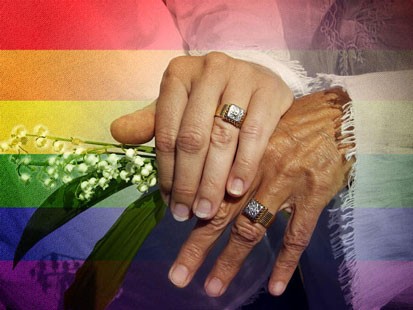 Christian marriage is a sacramental rite that has evolved in the church, along with confirmation, ordination, penance, and the anointing of the sick, and while it is not necessary for all, it must be open to all as a means of grace and sustenance to our Christian hope.

I believe this because the truth of it is in our midst, revealed again and again by the many marriages—of women and men, and of persons of the same gender—that are characterized, just as our church expects, by fidelity, monogamy, mutual affection and respect, and the holy love which enables spouses to see in one another the image of God.

In May of 2004 the Massachusetts Supreme Judicial Court opened civil marriage in our state to same-gender couples. That ruling set up a contradiction between what civil law would allow and what our church’s canons and formulary state, which is that marriage is between a man and a woman.

And so, for more than five years now, while faithfully waiting for the General Convention of the Episcopal Church to act in response, we in the Diocese of Massachusetts have been living at some cost with an imperfect accommodation: Our clergy have not been allowed to solemnize same-gender marriages, but they have been permitted to bless them after the fact.

In July of this year, the 76th General Convention adopted resolution C056, “Liturgies for Blessings.” It allows that “bishops, particularly those in dioceses within civil jurisdictions where same-gender marriage, civil unions or domestic partnerships are legal, may provide generous pastoral response to meet the needs of members of this church.”

Your bishops understand this to mean for us here in the Diocese of Massachusetts that the clergy of this diocese may, at their discretion, solemnize marriages for all eligible couples, beginning Advent I.

Solemnization, in accordance with Massachusetts law, includes hearing the declaration of consent, pronouncing the marriage and signing the marriage certificate. This provision for generous pastoral response is an allowance and not a requirement; any member of the clergy may decline to solemnize any marriage.

While gender-specific language remains unchanged in the canons and The Book of Common Prayer, our provision of generous pastoral response means that same-gender couples can be married in our diocese. We request that our clergy follow as they ordinarily would the other canonical requirements for marriage and remarriage.

And, because The Celebration and Blessing of a Marriage in The Book of Common Prayer may not be used for marriages of same-gender couples, we ask that our priests seek out liturgical resources being developed and collected around the church.

We also commend to you the October 2008 resource created by our New England dioceses, “Pastoral Resources for Province I Episcopal Clergy Ministering to Same-Gender Couples,” available at www.province1.org.

We have not arrived at this place in our common life easily or quickly. We have not done it alone. This decision comes after a long process of listening, prayer and discernment leading up to and continuing after General Convention’s action this past summer.

Our Diocesan Convention recently adopted a resolution of its own expressing its collective hope for the very determination that your bishops have made. Even so, we know that not all are of one mind and that some in good faith will disagree with this decision. Our Anglican tradition makes space for this disagreement and calls us to respect and engage one another in our differences. It is through that tension that we find God’s ultimate will.

We also know that by calling us to minister in the context of this particular place and time God is again blessing our diocese with a great challenge by which we might enter more fully into that ethic of love which Jesus speaks to us through the New Testament.

It is an immeasurable love given for all. We are being asked to live it, all of us, children of God, each with equal claim upon the love, acceptance and pastoral care of this church, so that the newness and fullness of life promised through word and sacrament might be for all people and for the completion of God’s purpose for the world.