The News of the first day of 2008, the ninth day of Christmas, and Day 33 of The City of God Christmas Appeal is mostly good.

Trouble is, if we don't get to $7,000 by The Feast of the Epiphany, Maddy is threatening to do terrible things to a puppy (If you've seen "A Fish Called Wanda," you know how those Brits get about threatening puppies. If you don't know what I'm talking about, well, he's got pictures.)

To make matters worse, I just got a note from the former Mrs. Kevin Federline who is back in the hair salon, threatening to cut off all her hair. She sent this picture, reminding us of just how ugly she can get when she's upset. 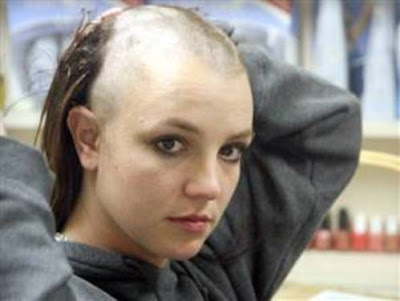 You know, the Pope has preached twice in the last three days about how LGBT people are a threat to the sanctity of marriage. Apparently, he must be the only person on the planet not to know about Brittany and Kevin and their kids. I don't even think his staff has dared to tell him about 16 year old Jaime Lynne Spear's pregnancy.

So please, if not for the sake of the sanctity of marriage or the sanity of Ms. Spears or the unborn child in her sister's womb, then please save the puppy from Mad Priest's evil threat!

Go over to his place NOW and donate by PayPal, or send your check or money order, made out to "The Episcopal Church of St. Paul" and earmarked "City of God" to:

Thank you. And, Happy New Year!
Posted by Elizabeth Kaeton at 8:16 PM