ENS: Pittsburgh Bishop has abandoned communion of The Episcopal Church 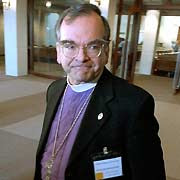 Presiding Bishop Katharine Jefferts Schori informed Duncan on January 15 of the certification and sent him a copy.

Her letter told Duncan that she sought the canonically required permission from the House's three senior bishops with jurisdiction to inhibit him, based on the certification, from the performance of any episcopal, ministerial or canonical acts.

"On 11 January 2008 they informed me that such consents would not be given at this time by all three bishops," Jefferts Schori wrote.

"I would, however, welcome a statement by you within the next two months providing evidence that you once more consider yourself fully subject to the doctrine, discipline and worship of this Church," Jefferts Schori wrote in her letter to Duncan.

The three senior bishops with jurisdiction -- Leo Frade of Southeast Florida, Peter Lee of Virginia, and Don Wimberly of Texas -- did give their permission on January 11 for Jefferts Schori to inhibit Episcopal Diocese of San Joaquin Bishop John-David Schofield in another case where the Title IV Review Committee certified an abandonment of the communion of the church. The House will consider the case matter involving Schofield in March.

The time limit to which Jefferts Schori referred is a two-month period afforded to bishops subject to such a certification to retract their acts, demonstrate that the facts alleged in certification are false, or renounce their orders by way of Title IV, Canon 8, Sec. 2 or Title III, Canon 12, Sec. 7.

The Title IV Review Committee told Jefferts Schori on December 17 that a majority of its nine members agreed that Duncan had abandoned the communion of the church "by an open renunciation of the Doctrine, Discipline or Worship of this Church."

The Review Committee's certification from Upper South Carolina Bishop Dorsey Henderson, committee chair, said that the committee received submissions alleging Duncan's abandonment of communion from "counsel representing individuals who are either clergy or communicants in the Diocese of Pittsburgh" and from the Presiding Bishop's chancellor, David Beers, and his colleague, Mary E. Kostel. They asked the Review Committee for a determination.

Some 40 pages of material submitted by Pittsburgh counsel, which allegedly "trace the course of Bishop Duncan's actions from the meeting of the General Convention in 2003 through the most recent Annual Convention of the Diocese" in early November, is included in the committee's certification and is available here.

The Presiding Bishop sent Duncan a letter prior to the convention, asking him to retreat from his advocacy of the changes.

The first section of Title IV, Canon 9 says that a bishop abandons the communion of the Episcopal Church if he or she takes one of the following actions:

* "open renunciation of the Doctrine, Discipline, or Worship of the Church;"
* "formal admission into any religious body not in communion with the
same;" or
*"exercising episcopal acts [which include primarily Holy Orders and Confirmation] in and for a religious body other than the Episcopal Church or another Church in communion with the Church so as to extend to such body Holy Orders as this Church holds them, or to administer on behalf of such religious body Confirmation without the express consent and commission of the proper authority in this Church."

just to let you know--your email link on the profile didn't work--that if there is anything more I can do in the situations you mentioned in your comment on dancing through doorways, please email me. I've been to the edge and back myself.

The only redemption for what I've been through is to make it serve others, and that is also my deepest joy.

Please feel free to refuse this as a comment.

Nina - the link worked for me, but I changed it anyway, just in case and it seems to be working okay right now. Thanks for letting me know.

I so admire your courage and appreciate your ministry. Would that the church had some of both of what you offer.