Warning: Being a Nana can destroy brain cells.

Our youngest granddaughter is very, very clear - surprisingly so for a three year old. She wants to be "Uniqua" for Halloween.

You don't know Uniqua? Neither did I.

She's one of the Backyardigans, a 3-D Children's Program that is very popular among the "Nick, Jr." set - that's the Toddler version of the children's network Nickelodeon.

There are five animated friends who are Backyardigans - Pablo, Tyrone, Uniqua, Tasha, and Austin. Each week, they use their imaginations - a Very Important Exercise - and turn their backyard into completely different worlds that open to them for exploration and adventure.

The music is always relentlessly pleasant, in that simple sing-song toddler way. There is as much emphasis on music and dancing as there is on imagination, creativity, adventure and exploration.

Each episode features a different music genre (such as big band, reggae, Spaghetti Western, polka, Motown, and disco) and four new songs, usually with at least one rearrangement of a well-known or traditional song.

Uniqua is a unique creature that is unlike any other in the world, and Uniqua is also the name of her species.

She is a curious, self-confident and high-spirited pink creature with polka dots and overalls. Uniqua is almost always sweet and friendly, though her strong opinions and occasional stubbornness get in the way of her relationships (Hmmm . . .reminds me of someone . . .)

She is more of a tomboy unlike her friend Tasha, often imagines herself in roles requiring brains and fortitude (scientist, pirate captain, etc), and loves books. But she can be sometimes more "girly" than Tasha. (Hmmm . . . apple, meet tree.)

Did you notice that she's pink? Pink is our granddaughter's absolute, positive favorite color. Except, of course, if there's purple ("PUP-ILL!!!" I've never heard her say 'pink' or 'purple' without at least three exclamation points at the end, but 'pink' will also lift her right off her little feet in a happy-happy-joy-joy dance.)

So, what's a Nana to do? Of course, I searched online for a costume first before heading out to my local Costume store. I found costumes that ranged in price from $24.99 to $49.99.

Are you kidding me? For a Halloween costume?

You don't have to be "stoopid in love" to be a Nana. 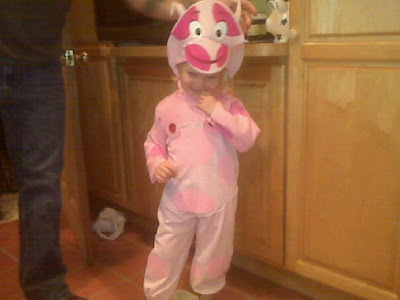 This is your "Awwwwwww" for the day.
Posted by Elizabeth Kaeton at 11:29 AM

I LOVE Uniqua!! She is an absolute FAVE in our house. Did you know that you can purchase a CD of Backyardigans songs from various episodes? All kinds of genres represented.

I recently heard podcast from NPR (I think) in which the producers of the show discussed how the dance routines are choreographed and then transformed into the animated show. We saw Uniqua one day sitting quietly in the midst of the momentos placed at the John Lennon "memorial" in Central Park. She seemed right at home...

So maybe I'm not losing brain cells. The things you can learn from your grandbabies is amazing.

They live in a world to which we are trying to adapt. They take things for granted that were once far beyond our imaginations. AND they seem to be much more accepting of each other, if not always of us. That will be good for us in the long run.

My favorite Disney character is Bell from Beauty and the Beast. One of the first female leads that was not a wicked step mother or witch. The way to Bell's heart was through books.

My least favorite is Ariel. The girl has to lose her voice in order to be 'a real girl' and get the man of her dreams.

So happy our grandkiddos have better role models. Even if they are cartoon characters.

TBTG there were the action figures Johnny West and Jane West when I was growing up. As you might imagine, I was quite fond of Jane West. She had a horse, a lasso, camping gear, and a Winchester 1892 carbine in a scabbard on her saddle.

One of my favorite things to do was lasso Barbie and have Jane and her horse drag her through the mud.

When I got to medical school, I discovered many of my female classmates abused Barbie as children. I think there could be a thesis on that.

Lora said...
There's a whole Backyardigans subculture out there. We went online and purchased them all a few years back. Every so often, one or more will again be the favorite of the week. Of all the kid shows, it's a favorite in our house. There are so many good ones that I can't even pick my very own favorite!