Why Am I a Feminist? 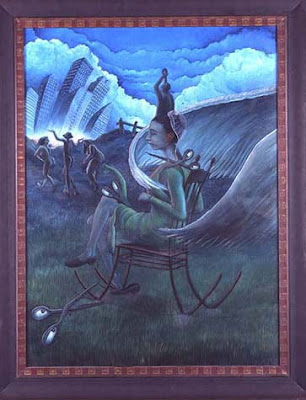 Note: I grew up as a Christian on the magazine 'Daughters of Sarah'.

It was the feminine voice of one crying in the wilderness of Christian Patriarchy.

It was the sound of Ruach, the mighty breath of God that swirled over the chaos of creation, bringing forth new life.

It was the music of hope, the dream of possibility, the balm of Women in Gilead.

I found this poem tucked away in the study bible I used while I was in seminary.

I reprint it here with great delight. Somehow, it speaks to me even more strongly than it did in 1985.

Please note: Being a Christian feminist is not restricted by one's gender.

Why am I a feminist?
Because I am a woman
and because I enjoy being a woman
as a result of the hard work of feminists before me
Feminists of the past enabled me
to get a good education
to vote
to have a voice in the assembly halls of my community
my state, my nation
to be able to work and earn my living
to no longer be considered as property
to know women who are scientists and artists
lawyers and doctors, diplomats and professors.
My grandmothers couldn't.

Why am I a feminist?
Because I join hands and work with women and men today who
dream of the day when women will be able
to be paid equal pay for equal work
to be included in the Constitution of the United States
(not just Amendment XIX)
to be given an equal voice in our churches, our schools,
and our homes
to no longer be expected to do all the serving
and only the serving
to be allowed to follow God's call
even when that call is to speak, to teach, to lead.

Why am I a feminist?
Because I join with women and men of the past, of today, and of
the future who dream of the day when all people will be able
to live lives free from poverty
free from violence
free from hatred
free from despair and fear
to know what it is like to live
with peace and compassion
instead of war and domination
with love and joy
instead of anger and dismay.

I have a full, happy life.
But the majority of people in the world do not.
I am a Christian feminist because I want to keep passing on
the rich, bountiful gifts that have been given to me
by God and by those who have faithfully lived out the
Good News.

I am a Christian feminist because the organized church
has carelessly thrust women
into soul-bending, spirit-crushing, ungodly mold
that makes it nigh impossible
to dream the dreams and see the visions
that God has for us all.

I dream and work for the day
when saying I'm a Christian
will say it all.

But until then,
I am a Christian feminist.

Posted by Elizabeth Kaeton at 7:45 PM

You should put this on a billboard next to major highways. That is a lovely poem. Maybe after that day comes, one will be able to name themselves a human being, and that will say someday say it all.

What a surprise to find something I wrote nearly 25 years ago posted in such a warm, generous way. I no longer identify myself as a Christian, so I agree with Seeing Eye Chick re: "saying I'm a human being says it all." My spiritual practice these days mostly involves kindness and poetry.
Thanks for remembering Daughters of Sarah -- it was a magazine that dared to ask the tough questions and to explore alternative possibilities. It was also a group of friends who gave me the courage to trust my heart.

What a delight to have you come by for a visit, Juanita. You are part of 'this bridge called my back' for me and so many women. Thank you for all you have been, are, and still will be for a generation of women who continue to need women with strong minds and hearts and voices.

Juanita, Your words are thought provoking. It is interesting to me that there aren't better adjectives to describe someone, this day and age, who want to see human rights for women, than feminist. I am definitely for women's rights yet don't consider myself a feminist. I am reading a great book about women that I think you would thoroughly enjoy. It's called Nurturing Nations, by Darrow Miller. Please check it out and let me know if you've heard of it. Thanks.

What a wonderful poem. I grew up with kind of a Christian background, but definitely a feminist since I was 12, and I would not have been baptized in 2001 if I had not felt so strongly that I was joining a feminist community. Both Jesus and Mohammed, incidentally, treated women dramatically differently than the norm in the society of their day: like people.

I am so moved by this wonderful poem. All women deserve to be treated with kindness love and respect. My mother taught me that and I am very happy and proud she did. I am person who defends and promotes for the equalization of all genders. So all can live in live and harmonyny together,