Holy Smoke! (Look what the British are saying about Rowan!) 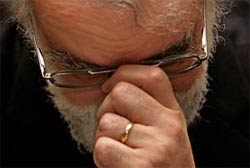 Holy Smoke
by Damian Thompson
From THE DAILY TELEGRAPH blogs:

Rowan Williams is finished as Archbishop of Canterbury. His authority has been utterly destroyed by the decision of the American bishops to reject his scheme to hold together the Anglican Communion. If there is a Lambeth Conference next year – and it is hard to see how there can be, if its American bankrollers are kicked out – then I shall be very surprised if he presides over it.

Any Archbishop of Canterbury would have faced almost insurmountable obstacles to preserving the unity of the Anglican Communion, many of whose members do not recognise each other as Christians, let alone as Anglicans. But Dr Williams has not come even close to surmounting them. Just as John Major never recovered from Black Wednesday, Rowan Williams has never recovered from Black Sunday: 6 July, 2003, when he forced his friend Canon Jeffrey John to withdraw his acceptance of the post of Bishop of Reading.

What was so shocking about this event was the fact that Canon John, a celibate gay man, was not breaking the Church of England’s own rules – unlike the gay bishops who have quietly carried on having sex without having the courage to declare their sexuality (or, in some cases, tell their wives).

Dr Williams was yielding to pressure from Archbishop Peter Akinola of Nigeria, an appalling man who has publicly supported barbarous legislation to jail homosexuals. Well, if you pay the Danegeld, you never get rid of the Dane (or Nigerian, Rwandan, Australian and all the other “Global South” anti-gay campaigners).

For almost his entire period in office, the treacle-voiced Welsh Primate with the Fu Manchu eyebrows has been bending over backwards to appease people whose views he privately abhors.

I thought Rowan Williams was going to be the finest Archbishop of Canterbury for decades. Instead, he has been a disappointment on every level – even in his own area of expertise, theology.

He does not put his foot in it as often as his predecessor, George Carey – but, then, you can’t commit a gaffe if nobody has a bloody clue what you’re talking about. He is obviously afraid that he will go down in history as the Archbishop on whose watch the Anglican Communion fell into schism.

But that’s not how I, and many other people, will remember him. For us, he will always be the Archbishop who laid down his friend for his life.

Posted by Elizabeth Kaeton at 8:15 PM

Well, there's an old saying "What goes around, comes around". He's been playing around with a power he never really had, and now it's come back to crush him. The Episcopal Church is quite effectively tone deaf to his pied piper act. Or as they say in the streets here, "You ain't the boss of me". We do not now, nor have we ever been politically submissive to outside influence. I'm sorry Rowan, I hate to see this kind of thing happen to anybody. I hope that you can physically and mentally survive this blow. I will pray for your health.

I agree with Bill. Damian has hit the proverbial nail on the head with this reflection of Williams. I think if I were him I would hang my head too.

I am frustrated with ++Rowan, but sad for him, too.

This isn't a job I'd gladly hold. I think that deep down ++Cantaur must be a pleaser - sensing the "growth" of the AC in the GS, he was looking to please that faction. It has unfortunately made him appear ineffectual, bullied, and weak willed (putting aside his own personal beliefs).

I am sure though, he does these things prayerfully, and believes he does them with God's blessing.

And the way God works, who knows? He might have God's blessing. For all we know, God's in the process of making sweet lemonade from all of this.