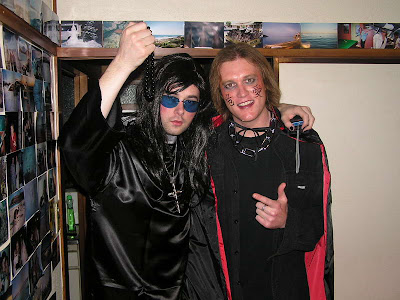 Our MadPriest has a new Mac and a new attitude.

He recently posted the following on his webblog, "Of Course I Could Be Wrong," which is a question upon which hangs all the laws and the prophets, much less the future of the Church of England and all of Western Civilization (which, as Ghandi posited, is not so much a reality as a "good idea".)

MP asks: What is it with lesbians and physical exercise? They're either digging up the wilderness to plant organic vegetables or they're cycling/jogging around in lycra and causing motorists to take their eyes of the road. Lycra is now the number one cause of all motoring accidents in the Northern Hemisphere.

Well, there it is, then.

BTW, I searched the internet, looking for a picture of Our Maddy, and came up with this snap. I rather like the one above, don't you?

The question is, which one is our Maddy?
Posted by Elizabeth Kaeton at 7:23 PM

he did say that he would be a little less active on his blog for a little while.

he's out driving around Newcastle looking for lycra wearing lesbians!

And, if he's in that outfit, he'll be easy enough to spot.

To be fair, the boys are running around in lycra too. Actually, we've been accused of prancing. Whatever, it's healthy and fun.

I think he is the one with the blue lenses. Instead of rose colored (or is it coloured) glasses MP sees the world through blue. Also he would never have tattoos on his cheeks.