Buddy, can you spare a few tuppance? 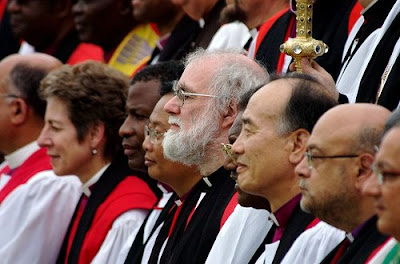 The Archbishop of Canterbury flanked by Primates of the Anglican Communion.
(ACNS/Gunn)


The Archbishop’s Council of the Church of England has issued a £600,000 loan to help organisers of the recent Lambeth Conference pay outstanding bills.

The interest free loan was made to the Lambeth Conference Company, the arm of the Anglican Communion charged with organising the conference.

The Archbishop’s Council and the Church of England’s Board of Governors of the Church Commissioners agreed to issue the loan in an emergency meeting to address a £1m shortfall in the Lambeth Conference budget.

A spokesperson for the Church of England said on Monday, "The [Lambeth Conference] Company has assured the Board and the Council that it is continuing to make further approaches throughout the Anglican Communion to meet the full cost of this year's Conference.

"It cannot, however, be confident that these will generate funds sufficiently quickly for it to meet all of its obligations as they fall due over the coming weeks and months."

Eyes are turned towards the Episcopal Church of the USA as the wealthiest province in the Communion to stump up the extra cash.

Presiding Bishop Katharine Jefferts Schori confirmed that the Church had been asked to help pay for the conference, which brought more than 600 bishops to the University of Kent in Canterbury last month.

She also alluded to the possibility of the Archbishop of Canterbury embarking on a fundraising tour of the US, although Lambeth Palace dismissed the idea, according to The Telegraph.

The Church of England said that the Board and the Council would return to the issue of paying for Lambeth in September meetings.
Posted by Elizabeth Kaeton at 10:17 AM

I can only speak for myself: not one dime.

I understand that they sent the Diocese of New Hampshire a request for $6,000. What gall!

I don't mind helping the bishops from other countries to come to Lambeth or some less expensive place to meet. But at the same time to kick our shins and then say we have to pay for the pleasure... Nawwwwwww!

In trying to grab some forgiveness from my pocket, I failed. Guess I need to work on that.

The sting is real.

Last week these guys wanted to kick us out of the communion, today they want us to pay for their primatial tea party. Get real.

And I don't want to hear any more of that c*** about being "gracious." I am tired of paying to be kicked in the ass.

No money for Lambeth.

Appears to me we in the Episcopal Church are already paying for Lambeth....

and not in coin of the realm.

If I may paraphrase Charles Pinckney, "Not one cent for tribute !"