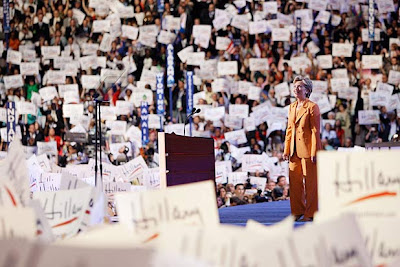 The President of the 'Sisterhood of the Traveling Pantsuits' put a few more cracks in the glass ceiling tonight, shining the light of unity on the Democratic National Convention.

She asked her supporters if they voted for her or to address the critical issues that face our country, articulating them one by one, and then told the audience that a vote for Obama is a vote for action and change on those very issues and concerns.

She proved that she is not only a pioneer, but a leader.

She was intelligent, articulate, passionate, inspiring and absolutely crystal clear:

And if that wasn't clear enough, she said:

Say what you want about her, but after tonight, there's really only one thing to say:

What a class act!

You can watch her here.
Posted by Elizabeth Kaeton at 11:12 PM

Now let's go get out the vote.

Every inch a class act - she was great!

Very much a class act! I have never been so proud to have her as my Senator!!!

Yes, she was a class act. "Did you vote for me or for..." and she named those who needed a change from the current policies. That was brilliant.

While I agree that it was a very good speech, HRC did not go after McCain enough, considering all nice things she said about him during the primaries, that he's now putting into his ads against Obama. She made no mention of Roe v. Wade and what a McCain presidency would do to Pro Choice.(Many of her PUMA supporters don't know that McCain is anti-choice and would nominate only conservatives to the Supreme Court.)
Lastly, she did not praise Obama enough. For some good takes on her speech read Maureen Dowd's op-ed piece in the NYTs, or Nora Ephron's on the Huffington Post, or go to TalkingPointsMemo.com (Bill Moyers way to start the day.)
HRC will never be truly classy until she gets rid of the milstone around her neck, the one named Bill Clinton.(We'll see what he does or doesn't do tonight.)
A final thought-Gov. Schweitzer's of Montana address should have been the keynote address. He hit McCain hard and over and over, just the way Begala and Carville have been urging the DNC to do.

I haven't been this cranked up in years.
There were all the talking heads touting rumours that the Clintons would make this week into a sideshow.
Her presentation was mind-boggling, the pundit comments made me very angry.
EVERY speech this week was a mover and shaker and I was riveted. I slept well most nights.