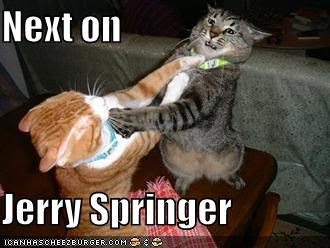 An interesting memo from Bob Duncan which is being circulated by some who are concerned.

Is Ft. Worth going to Rome or Southern Cone? Is an "automatic second vote" really necessary? Can votes or conventions be rescheduled or postponed in order to consider compliance with the WCG and ABC's strong request for moratoria?

Someone recently described the activities of Fort Worth, Pittsburgh and Quincy and the Windsor Continuation Group as being rather like watching a slow motion fight between aged, toothless cats.

I find myself scratching my head and asking why anyone who claims that his deposition (rumored to be on the agenda for discussion at this September's HOB's meeting), is "unfair" would be putting this kind of stuff in email dated August 11 which can - to wit - be so easily reproduced and distributed.


It was very good to be with you at Lambeth. I especially appreciated the time we spent together looking at the relationship between the Common Cause Partners and the Communion Partners, as well as considering issues that are before the WCG.

I thought that you might appreciate hearing from me about concerns the approach of the WCG has caused for me and for all the Common Cause Partners.

The WCG proposes "cessation of all cross-border interventions and inter-provincial claims of jurisdiction." There are at least four serious problems with the thinking surrounding the work of the Windsor Continuation Group in this regard.

The first difficulty is the moral equivalence implied between the three moratoria, a notion specifically rejected in the original Windsor Report and at Dromantine.

The second is the notion that, even if the moratoria are held to be equally necessary, there would be some way to "freeze" the situation as it now stands for those of us in the process of separating from The Episcopal Church.

The three dioceses of Pittsburgh, Quincy and Fort Worth have taken first constitutional votes on separation with second votes just weeks away. We all anticipate coming under Southern Cone this fall, thus to join San Joaquin. This process cannot be stopped -- constitutions require an automatic second vote, and to recommend against passage without guarantees from the other side would be suicidal.

The third reality is that those already separated parishes and missionary jurisdictions under Rwanda, Nigeria, Kenya, Uganda and Southern Cone (including Recife) will never consent to the "holding tank" whose stated purpose is eventual "reconciliation" with TEC or thevAnglican Church of Canada. (It was obvious to all at Lambeth that the majorities in the US and Canada have no intention of reversing direction.)

The fourth matter is that the legal proceedings brought by TEC and ACC against many of us have been nowhere suspended by these aggressor provinces, with no willingness to mediate or negotiate though we have proposed it repeatedly, not least since Dar es Salaam.

For your information, I have written to John Chew and Donald Mtetemela in a similar way. I have also written to the Global South Primates who signed the open letter dated 3 August.

I hope this finds you well. As I pledged when we saw each other, I will do what I can to keep you informed of thinking among the Common Cause Partners, and will do what I can to see that any solutions imagined include both the Communion Partners (on the inside) and the Common Cause Partners (most of whom are on the outside of TEC, or on their way out.)

Blessings to you and yours,

+Duncan does not worry about what action TEC might ultimately take against him. He, like +Iker, +Ackerman and +Schofield before them, no longer recognize any "authority" of TEC over them, or their flocks. TEC has made very clear that it has chosen a new path and one in which no orthodox Anglican can long survive. The die is simply cast and the time has come for all sides to simply act as Christians should act and bid each other farewell in peace. But, of course that will not happen. Jesus weaps.

Anything on what gives with Henry Scriven's resignation?

It is true that Bp Duncan's plans are clear. However, he has not actually violated the canon yet, and there is no canon outlawing "conspiring to leave the Episcopal Church." So to convict him now of something that he has talked about doing but has not yet done is wrong.

I am thankful that Bp Duncan, Bp Iker, and Bp Ackerman are being true to their ordination vows to uphold the Christian faith as this Church has received it. They are not alone, but they are in a minority.

there is no canon outlawing "conspiring to leave the Episcopal Church."

Are you listening to yourself, Hiram? Because you sound freakin' ridiculous.

I am thankful that Bp Duncan, Bp Iker, and Bp Ackerman are being true to their ordination vows to uphold the Christian faith as this Church has received it.

No ONE person---lay, deacon, priest or bishop---gets to decide what "the Christian faith as this Church has received it" is: that's up to GC.

The honorable thing to do, if one feels TEC has "departed The Faith" is to renounce your vows, and resign your position. That's what honorable conservatives, such as the former Bishop of the Rio Grande (name escapes me, but he swam the Tiber), have done.

(x)Duncan's machinations, as w/ xSchofield before him, are without honor.