Worries about Gustaf gottcha down? Never fear - McCain and Palin are here (almost!) 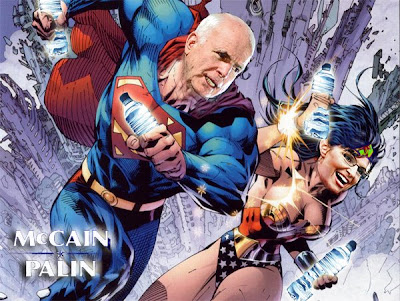 Hat tip to Marcia for the picture from 'Daily KOS'
Presumptive Presidential Nominee, Senator John McCain and his choice for VEEP, Alaskan Governor Sarah Palin are already on the case, with a plan to visit the Gulf Coast today before the Republican National Convention begins in Minnesota on Monday.

In North Jersey, immediately after our local meteorologist appears on television and says three magic words "possible snow storm," everyone heads to the grocery store for three things: milk, bread and toilet paper. Don't ask me why. It's just what we do.

Unless, of course, it's the first storm and then we also stop at the hardware store and buy snow shovels and ice melt - whether we need them or not.

In the South, immediately after the National Weather Center says "possible hurricane," apparently, the two words that are hot on everyone's lips are "bottled water."

Of course, they also head to the hardware store and get great sheets of plywood, along with hammer and nails to protect their windows, which, near as I can tell from pictures of the devastation afterward, plywood on windows helps about as much as ice melt on snow.

The report is that McCain and Palin are bringing good old fashioned American "Can Do" Spirit - along with some cases of bottled water.

What a huge change from the almost-previous administration, right? Wow, that old man and inexperienced woman are really brave, courageous and bold. I'm so impressed!

Update: To read what some women are saying about Lady Sarah, visit this site and check out what Whoopi Goldberg, Marlo Thomas, Joan Ganz Cooney and Sheila Nevens are thinking.
Posted by Elizabeth Kaeton at 9:08 AM

When you see the two of them together on a campaign poster it looks like a "wrinkley old white guy" (Thanks, Paris!) and his trophy wife. Oh, that's right, he already has a RICH trophy wife, maybe Palin is his trophy mistress then?
I know, I'm really getting catty but I can't help myself. MEOOOWWW!

I feel bad for her. She's obviously being used for political gain and was not chosen because of any other reason than to appeal to the religious right, and as Joan Ganz Cooney said, is an "irresponsible choice."

It's still astounding that they would be so transparent. Someone is giving them very bad advice.

This just looks crass and tacky.

There are about a dozen really BIG preliminary non starters for Palin. I can tell you, I was on the fence about Obama because his energy policy is ALL wrong when it comes to carbon energies and nuclear energies.

However, between the nifty commenters at my site, some thought, and the choice of Palin who supports slaughtering wolves from planes, I was tipped right back to Obama.

The fact is (as Marlo Thomas points out on Wow), McCain and the GOP (read Rove) don't get women.

As many women will run from McCain because of Palin's choice as will be attracted because of her religious right beliefs (she supported Pat Robertson in the past), her energy belifs (in three words, drill, drill, drill), her lack of compassion for wildlife and wildlands, and her inadequate experience.

In fact, polling showed that women were NOT moving to McCain because of the choice (more men were, though).

It's a huge gamble both to cement the Ralph Reed bunches to McCain and to attract some Clinton supporters that just couldn't move to Obama.

Most women are looking at issues--not gender, as it should be.I no more want a female war monger in the white house as VP (especially against a 72yo presidential candidate that doesn't GET it) than a man.

To paraphrase Carvell from 1990, "It's the issues, stupid!" In this case, energy, economics, war, environment--ALL tied to one another through energy policy or the lack thereof.

Yes, you can help yourself.

Whether it is racism, sexism, or ageism, we must help ourselves.

You know, besides all of the politics, the main thing is this: Let us pray for all those in Gustaf's path.