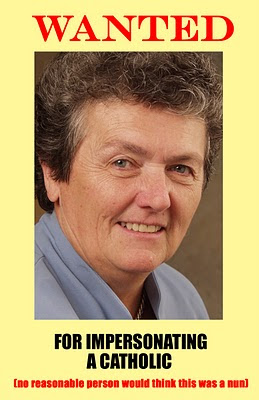 Sr. Joan Chittister is my hero.

Her spirituality is not only the best of catholic monasticism, it is the best of the remnant of post Vatican II theology - the stuff I cut my religious teeth on when I was a child and a young woman.

She was one of my role models for ordained leadership in the church. Without knowing it, she taught me what it might mean to be a woman and a priest in God's 'one, holy, catholic and apostolic church'.

She continues to provide clear, intelligent, articulate leadership that models what it means to be a Christian and a member of a religious organization - and not just the Roman branch - that is often a barren, dry wasteland of examples of Christian leadership.

My dear friend, Nigel, sent me this article last night in which Sr. Joan takes on Glenn Beck's latest idiotic rant about 'social justice'. Beck is on the record as saying,

"I beg you," he said, "look for the words 'social justice' or 'economic justice' on your church Web site. If you find it, run as fast as you can. Social justice and economic justice, they are code words (for socialism.) Now, am I advising people to leave their church? Yes!"

In Sr. Joan's latest column at NCR, she writes about the work of Sr. Marie Claude Naddaf, a Sister of the Good Shepherd, from Syria.

Sr. Joan reports that Sr. Marie Claude is in this country

to receive the U.S. State Department's "International Women of Courage Award." Given to 10 women around the globe who have shown "exceptional courage and leadership in advocating for women's rights and advancement," the awards purpose is to support women who are working for the equality of women everywhere. And any woman who has ever spoken up for women's equality in any arena that counts -- in politics, in business, in law, in the home, in the church -- know exactly how much courage that requires. Even now. Even here.

I hope you read the entire article and learn about this woman's incredible work with those who are 'trafficked women' - women and girls who had been sold across national borders into the sex slave trade or seduced into it on the promise of a job or simply abducted into it off the streets as children.

I heard Marie Claude Naddaf, a Sister of the Good Shepherd, gasp on the other end of the phone. "Noooooooo," she squealed. "This is the work of God. The spiritual life gives us the energy we need to do justice. There is no contradiction! It's a circle!"

Then she said, "Invite this man to come and see me in Syria. I will show him." And one more thing. "Tell your government that it must do something to help the Iraqi refugees in Syria. They need resettlement programs and financial support for widows and children." Her meaning was clear: The United States started the war that put millions of people adrift "but Syria has borne the whole expense of it."

From where I stand, it's clear why the Glenn Becks of the world would not want to hear anything about 'social justice' from a church. Certainly not about women and war. Or about Sister Marie Claude either. Let's hope he takes the invitation.


I do, too. I'd love to hear Mr. Beck's reaction to his visit with Sr. Marie Claude.

Now, that's one time I just might turn my dial to Fox News.

Oh, and about that poster which I nicked off the blog of a Roman Catholic Right Wing nut's blog (Yeah, they got them, too. They're everywhere, it seems.).

One word, sir: The church can make you a nun (or a priest), and it can even make you an impersonator of either role, but there's something about being a follower of Christ that does not make you a 'reasonable person'.

Not when it comes to social injustice.
Posted by Elizabeth Kaeton at 9:01 AM

Glenn Beck would never take the good sister up on her offer. Glenn Beck and his ilk are all cowards.

Just for haha's I googled Mr. Beck. Turns out, he's a Mormon - known more for their evangelism than their stands on social justice issues. Well, that and other things, of course. He's also a recovering addict and has ADD.

I think he may be off his meds and on the sauce.

And he's such a good role model too: it's that calm objectivity I so admire.

Mormon church leadrers are none to happy with Beck either.

It's even divided the people who work at Faux Noise. Too Bad!

Sr Joan is a great role model for all Christians! Love to her and you all!

Glenn is starting to self-destruct.

There is this, and his attempt to "uncover Democratic conspiracies" by inviting on a disgraced Democratic politician who had, in a heated and stupid moment, said he was being shut out for refusing to toe the party line.

The result was Glenn Beck actually apologizing to his audience for wasting their time after receiving a thoroughly-public refutation of all his assertions.