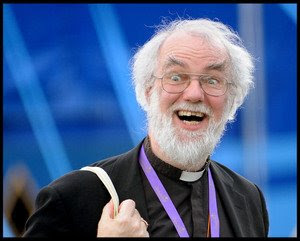 The Archbishop of Canterbury, Rowan "Harry Potter" Williams, is pictured here and below, to the left, jauntily leading the primates and bishops of the World Wide Anglican Communion to The Big Blue Tent, which has already been affectionately nicknamed "Hogwash." 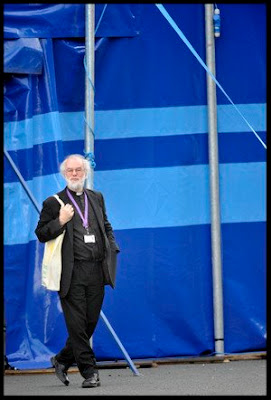 It is here, after receiving their assignments from the "Sorting Miter," the men and women in purple and magenta will be led into four "Indaba Houses" where they will be on intensive retreat before engaging in a two week course of studying Ancient Sacred Writ and discussing Very Important Things.

The first of the four Indaba Houses is Shoriclaw, known to value intelligence, creativity, wit and wisdom. "Wit beyond measure is a person's greatest treasure" is an of't repeated motto of those in The House of Schoriclaw.

The Shoriclaws are recognizable by their color-coded badges: Their mascot is an eagle, their colors are blue and bronze.

Those in the House of Akinolarin value ambition, cunning, resourcefulness, and pure blood heritage. Most Akinolarins display a high level of Machiavellianism, as the hunger for power is a characteristic of Akinolarins.

The animal representing Akinolarin is the serpent, and their badge colors are green and silver.

Those in the house of Robinsindor value courage, daring, nerve and chivalry above all else. Though Robinsindor is commonly regarded as the protagonist house, not all Robinsindors are protagonists; however, many of the bishops of North America are known to have been assigned to this house.

The mascot of the Robinsindors is the lion, and they can be identified wearing badge colors of scarlet and gold.

The fourth and final House is Sentamupuff which is known to value hard work, loyalty, tolerance, and fair play above all else.

The house mascot is the badger, and their badge colors are canary yellow and black. 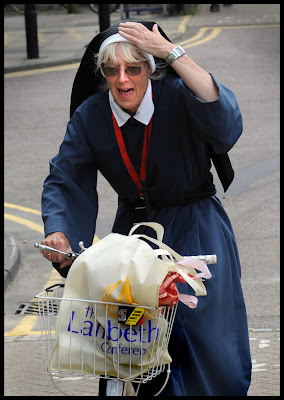 For more information about the first day of Lambeth, please see this article by Hermoine "Ruth" Gledhill, reportedly a Muggle, but also known to be highly versed in the History of Magic.

(Note: Muggles are those in the Anglican Communion who do not wear purple or magenta shirts or hats with three points, known as Miters; neither do they wear magnificently brocade copes with matching stoles or mantiples and are, therefore, not allowed to be part of Very Important Resolutions or Decisions about the components of a Covenant.)

Ms. Gledhill, who can often be seen riding her bike across the campus of the University of Kent, is not only charming, she is also rumored to to have some skills in charms and potions and apparently excels in Arithmancy.

There are also more delightful pictures (like the ones reproduced here), all taken by Chris Harris, another Muggle who is rumored to have notable expertise in Divination as well as Apparition.

"These are necessary, indeed essential, skills," Mr. Harris sighed wearily, "when working with the likes of Ms. Hermoine Ruth Gledhill."

Please note: There will be several hours delay - at least five, in fact - in reporting while I am on this side of the pond. I will be able to provide "up to the minute" reporting of The Lambeth Circus Maximus after July 21st.
Posted by Elizabeth Kaeton at 12:12 AM

This is pretty darn funny, Elizabeth.

So you're in England now, eh?

I gotta admit: I've grown fond of Ruth Gledhill's reporting. I hope you two go out drinking one night.

It's a good thing I wasn't drinking a beverage when I read the Rowan "Harry Potter" Williams name. LOL!!

Thanks, Lisa. I'll be in England July 21. And yes, of course, Luiz, that's Sr. Pamela. I was just having a bit of a go at Our Ruth - who really has sort of grown on me over the past few years. I think she started out really, really wanting to believe in the "orthodox" cause, but, well, I think her eyes have been opened.

I think - well, never mind what I think - let's just watch the rest of the drama of this Big Fat Anglican Wedding unfold.

Hilarious! but I always thought "our" Ruth bore an uncanny resemblance to Rita Skeeter.

"The mascot of the Robinsindors is the lion, and they can be identified wearing badge colors of scarlet and gold."

I sort of thought that the Robinsindor colors were the "Rainbow", signifying total inclusivity and harmony. A house which welcomes the full spectrum of humanity.

Elizabeth, this is excellent, inspired, even. It's a rare sight to see bishops waiting in a queue. What a snap of the ABC! He won't like it, unless he has a very large sense of humor.

Are we talking abou the same Ruth who posted in Times Online yesterday that ""It can't be any coincidence that the boycotters are, by and large, the ones who understand how to talk to a fellow human being with dignity, and not turn their backs on them and shun them"?

Amazing what happens to a person in Hogwart.