Michael: Ginger Snaps with His Grace 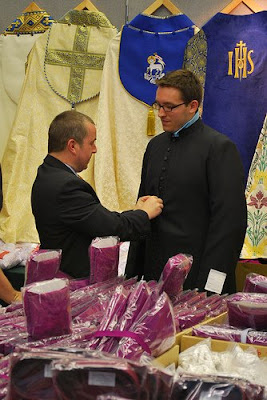 Note: Michael Sniffen, canonically resident in the Diocese of Newark but presently Associate at St. John's, Laddingtown, LI, is one of the Lambeth Stewards.

I'm meeting him for dinner later tonight, which will be the first time I will have seen him since 'landing'. We're also meeting with Allie, Luiz and Jon - it should be grand fun. This is an excerpt from one of his notes to me about his experiences here:

" . . .I also received my invitation to the garden party yesterday. I knew the invitation would be a nice keepsake, but it really is priceless!

"The Lord Chancellor is commanded by Her Majesty to invite Michael Sniffen to a garden party at Buckingham Palace for those participating in the Lambeth Conference."

How is that for something you would never hear back home?!

I had tea yesterday with Rowan Cantaur, several other bishops and the patriarchs of many orthodox churches. It was out on the lawn and the weather was beautiful.

As the Archbishop of Canterbury put milk in his tea and reached for a cookie, he leaned across the table to me and said - "I rather fancy ginger snaps."

I have not seen that announcement in the press yet, but I did keep the ginger snap wrapper from tea for a sermon I'm working on. Or perhaps I will just slip it under the fair linen at St. John's!

At this same tea, I was talking to +N.T. Wright who somehow lost his vestments en route to Canterbury. After much joking about it, he said "well, if we manage to keep the Anglican Communion together - who cares what I'm wearing, right?"

The moral of the story is that the Anglican Communion is stronger than many are willing to acknowledge and it is not going to collapse anytime soon.

After all, it's not build upon vestments or ceremonial. It's powered by ginger snaps.

(The picture above is of Michael being fitted for a new cassock. The WWAC may be powered by ginger snaps, but as Michael is discovering, it never hurts to have another 'little black dress' in your closet.)
Posted by Elizabeth Kaeton at 10:35 AM

They do say that what hold the Communion together is Wippell's ;-).

I'm sorry, but my image of tea with the patriarchs is a little marred by the notion that ginger snaps were served in little packets. Does that suggest fear of cross-contamination, or just of the decline of civility in general?

Elizabeth, I'd love to be at the dinner with all of you. Hug them all for me.

So. +Tom lost his vestments. I'm so sorry.

Mwah, Elizabeth. Thanks for your reports.

"I rather fancy ginger snaps."

I bet Michael+ has never heard a "come on" such as that!

Actually, it wasn't just ginger snaps.. there were also lemon shortbread cookies in the wrappers, vienna fingers (no jokes, please) as well as oatmeal raisin etc.

What Michael didn't mention was my accidental scolding of +Rowan when he put the wrapper back into the box of cookies and not the adjacent rubbish bin.

Oh, and actually the post lost +Tom's vestments... that was why he was wearing a cassock at the opening Eucharist.. he was borrowing someone elses.

Lunch with the Queen? There will be no living with him after this.