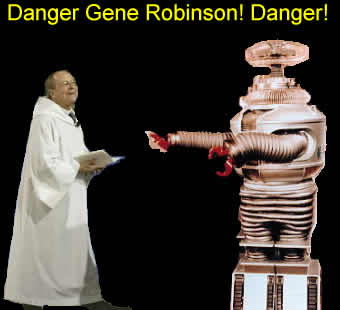 Openly gay US bishop Gene Robinson was forced to halt a sermon at a west London church after being heckled.

As Bishop Robinson began his sermon a member of the congregation repeatedly called him a "heretic" and said "repent, repent, repent".

He began his sermon by saying how sad it was that the Anglican Communion was tearing itself apart.

But he was stopped when the man in the congregation shouted that the schism was the bishop's fault.

The man's protest was followed by slow hand-clapping by members of the congregation, and Bishop Robinson halted his sermon while a hymn was sung and the protester was escorted from the church in Putney, south west London.

The man was taken outside and left on a motorbike, but no further action was taken against him by police officers present.

Bishop Robinson resumed speaking shortly after the interruption, asking church members to "pray for that man".

"When someone stands up and says homosexuality is an abomination, does that make you want to get to know God?"

Bishop Robinson emphasised that the congregation should reject fear.

"You know, whatever you think makes you unworthy, I don't think God wants to hear it any more."

"All you have to do is turn up and open up your heart."

Among those in the congregation was Health Minister Ben Bradshaw. Speaking afterwards, Mr Bradshaw said the sermon was excellent and inspirational.

"He is a very brave man speaking the truth," he added.

The end of the sermon was met with warm applause.

Bishop Robinson's address comes as the Anglican Communion gather for their 10-yearly Lambeth Conference in Canterbury.

His ordination as bishop of New Hampshire in 2003 split the Anglican Communion, and he has been excluded from the conference amid deep Anglican divisions over the issues of women bishops and homosexuality in the Church.

Earlier, he said "a mistake was made" in not inviting him to the conference, but he would do whatever he could to raise the issue of gay rights "from the fringe".

He said he would not stage any kind of protest, but would be in Canterbury during the conference simply to "preach the word of God".

Bishop Robinson also said the Archbishop of Canterbury was in an "almost untenable" position as he tries to retain unity in the Church.

He said that despite Dr Rowan Williams's attempts to overcome deep divisions over the ordination of women and gay people, "no matter what he does he makes someone mad."

Anglican conservatives set up a splinter movement earlier this month, in rejection of the acceptance of gay bishops.

And last week the General Synod, the Church of England's ruling body, voted in favour of legislation aimed at introducing women bishops, a move which generated acrimony.

Some 1,300 clergy opposed to it had threatened to leave the Church if the safeguards they wanted were not agreed.

Bishop Robinson went public with his sexuality in 1980 and has since been in a 20-year relationship with current partner, Mark Andrew.
Posted by Elizabeth Kaeton at 9:27 PM

I just don't know how Bishop Gene does it with his calm, cool demeanor intact. If I had to be him for 24 hours, the Brit tabloids would read, "Bishop rips heckler's head off and defecates down his neck." Sigh.

Gene, you're my Heeeee-ro. Honest and for true!

"Current partner" ?! If he were straight, would the article have called his spouse his "current wife?"