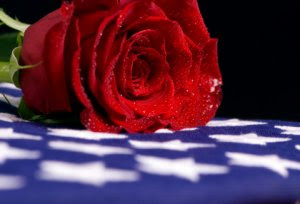 No matter where you come down on the wars in Iraq and Afghanistan, there is no debate about our country’s devotion and gratitude to the men and women who have lost their lives in service to America.

This Fourth of July, the Women on the Web takes a moment for a solemn salute to the ultimate wowOwow women: the 110 female soldiers who have lost their lives in the Iraq and Afghanistan conflicts. Our hearts go out to their families and friends, and we stand humbled by and proud of a nation and a culture able to produce daughters so brave and so honorable.

The number of fallen women in today’s conflicts outstrips the female death toll in the Korean, Vietnam and Desert Storm confilcts combined.

According to the Women in Military Service for America Memorial Foundation, eight women died in the line of duty in Vietnam and 16 died during Desert Storm in Kuwait.

Today, women make up 15 percent of America’s active duty forces and, as a result, the death toll among women soldiers has significantly climbed to where it stands today, July 2, 2008, at 110.

These are the true daughters of the American revolution, the revolution that has allowed women to shatter glass ceilings in all walks of life … even when the consequence is heartbreaking.

Links to wowOwow’s Fourth of July photo tributes to all 110 fallen female soldiers are listed. I found that looking into the faces of these s/heroes to be as inspiring as it was disturbing.

Please say a prayer for the 4,635 men and women who have died in Iraq and Afghanistan.

Hat tip to Marcia who directed me to this link.
Posted by Elizabeth Kaeton at 11:18 AM

Thanks for posting this tribute to the 110 wives, daughters and friends who gave everything for our freedom.

I am thankful that, after 2 tours of duty as a humvee gunner and swat team member in Iraq, my son came home this year.

Have a great 4th weekend!!

My cousin got back from Iraq in January and my best friend's son is slated to go to Afghanistan at a date yet to be determined, so it's always a somber thing for me to think about the ones who did not come home.

But then again, I'm ready for them ALL to come home.