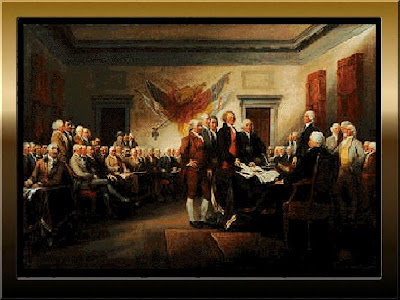 Well, I was a wee bit nervous, but "A Service of Lessons and Patriotic Hymns for A National Holiday", with Eucharist (of course) was an unconditional success yesterday.

Some of you know that I was inspired to put it together based on the work of one of our creative, talented brothers, Ernest Cockrell, who has been a long time deputy to General Convention from the diocese of El Camino Real.

This service was really born out of my intense discomfort in singing Patriotic Hymns in church and yet a desire to be pastoral to those for whom these hymns have deep, personal, spiritual meaning. (Remember, I live in what is lovingly referred to as "Republicanville" and "Mayberry USA.").

Additionally, as one who considers herself Anglo-Catholic, I also have an inherent dislike for celebrating and observing civic or secular holidays in church.

Then, there's this thing about separation of church and state. Well, it's an odd thing, isn't it? I mean, our nation came into being from the spark of the desire for 'religious freedom' and many of the framers of the Declaration of Independence and the Constitution were also good CofE men who also framed the Constitution and Canons of TEC.

And, don't get me started about the role of clergy in marriage.

Woe is me, but I have this old fashioned idea about liturgy not being about me but about the priest being a servant to "the work of the people." The balance comes in trying to maintain the integrity of both when there are differences about the exact nature of "the work." You know. Like being an Anglican.

I must tell you that, singing those hymns in the context of the time they were written made all the difference for me. Yes, I still squirmed at the militaristic imagery, but singing about them immediately after hearing part of an historical document read or the voice of one who was alive at that time made it tolerable because it was more understandable.

Hearing Abigail Adams speak about the rights of women, and Chief Seattle speak about his understanding of the communion of saints vis a vis the land which he was being forced to "sell" to the government was very powerful. Indeed, there were several audible gasps from the congregation during those readings.

However, by the time we got to hearing Dr. King speak about being a "creative extremist" from his cell at the Birmingham Jail and then sang, "We Shall Overcome" - well, there wasn't a dry eye in the house.

It isn't noted there, but after the reading of the gospel and before the final prayer, I gave a very brief "homelette" about "a more perfect union" and how our union is perfected by the act of confession and repentance, forgiveness of sins and true amendment of life. This, to me, is why we have this kind of service in church - to pray for and participate in "a more perfect union."

I might tinker a bit with some things next year, but the response from the congregation was overwhelmingly positive.

I offer it to you as a consideration for your service next year as a "liturgy that works." Thanks to all of you who commented and helped to improve it in its first incarnation.

You can find it here.
Posted by Elizabeth Kaeton at 1:03 PM

We used this, slightly adapted, in my church yesterday as well. It was a success on many levels. I posted our version on the parish's sermon blog--with attributions and a link back to your original. It ws great. Thanks, Elizabeth.

Do go over to Jeffri's site (Click: Telling Beads on the right had side of your screen under "My Favorite Blogs.") He made some changes that I really love. It will help me tinker with this next year. I'm thinking of using Sojourner's quote, plus something from Trial of the Rosenbergs and something from Edward R. Murrow. We certainly have a very rich history in this country - so much of which we've forgotten - on our way to "a more perfect union."